Most people have in their fridge a bottle of salad dressing.

What they don’t know is that it makes them sick, and I’m gonna show you why.

There is a lot of advertising and a lot of effort out there to talk anyone and everyone into buying into of literally thousands of salad dressings. It is a big, big business and the industrial food production complex want to keep everyone a chained economic slave to that convenient bottle of salad dressing.

Well, I am here here to convince you to use the cold steel chisel of common sense to strike off those chains.

I am here to bring you the truth of most bottled salad dressings. This blog post is going to teach a little, make you think a lot, and probably get you a little mad at industrial food complex, those corporations that are willing to make consumers just a little sick to pad their profits.

Never sick enough to stop buying, of course, but the healthiest product is never the first priority of these corporations … profit is.

In today’s world: Return to your roots where you control Food quality & dodge poison.

At Qualifirst the first priority is the quality of the product.

Dressings have been around a long, long time, but always made in the kitchen, never I.

Fermented sauces were made in Asia thousands of years ago. They were fermented as a way of stretching salt, then an expensive commodity. One of those sauces was called jiang (酱) that would later become soy sauce in the period between the 3rd and 5th century.

So we can agree that throughout history, man has actively used dressings, fermented or oil + vinegar + spices.

Then what caused the spark, shifting oil & vinegar to store-bought dressings?

The answer appears to be: Mayonnaise!

We could just blame the French (always a good strategy) but the origin of mayonnaise is a hot topic of debate. 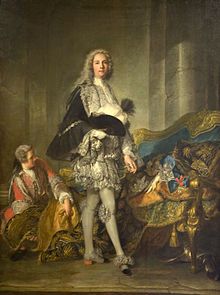 This painting above is a French nobleman – Armand de Vignerot du Plessis – bringing it back from the city of Mahon in Spain when he defeated the British in 1756.

Makes sense, since the story calls the sauce ‘Salsa Mahonesa’ in Spanish and ‘Maonesa’ in Catalan. Unfortunately there is little documentation to support that idea.

That bastion of all things culinary, the Larousse Gastronomique, claims probably correctly that the stable emulsion of egg yolks and oil with an acid (vinegar or lemon) is a Mediterranean invention with the name coming from the Old French word of egg yoke ‘moyeu’ and the supporting documentation is quite good for this since that amazing French sauce ‘Aioli’ has a long history.

Thanks to illustratedbites for this illustration.

Aside from the cool word with five letters and four vowels, Aioli is a classic sauce with basically garlic, oil, egg yolk, lemon juice, and salt with some seasonings depending on the region.

The thing about mayonnaise: it’s a stable emulsion when properly made. A mayonnaise can have up to 85% oil before breaking up.

Popular restaurants started bottling their best salad dressings so that their customers could take them home.

A famous example is Mr. Richard Hellmann, who owned a popular deli in New York in 1912. The mayonnaise he made for his sandwiches and salads became so popular he sold his blue ribbon mayonnaise in wooden containers. Demand increased, so he started selling his mayonnaise in glass jars. Quite quickly the sales of mayonnaise outstripped the deli business.

Steve Henson created the most popular brand of salad dressing in North America called Hidden Valley Ranch Dressing, a dry seasoning mixed into (you guessed it): mayonnaise and buttermilk.

How crazy were people about Hidden Valley Ranch Dressing? In the late 1950’s people poured it on steak and ice cream … wow …how crazy is that? Today the #1 dressing in North America.

This trend proved irresistible to consumer-convenience-oriented industrial food companies that could see profits in the future. So it was in 1925 that the Kraft Cheese Co purchased a few regional mayonnaise manufacturers as well as the Milani Company, launching their bottled dressing: French Dressing, which was basically an oil and vinegar base flavoured with tomato and paprika.

Rather than write a book on salad dressings we can see that basically all of these dressings are: Oil, vinegar, spices, seasonings, and knowledge.

There are two other facts about bottled salad dressings today:

The use of High Fructose Corn Syrup (more on this later …), of GMO ingredients, and other horror stories about what today’s industrial food companies will put in the bottle in their quest for profit at the expense of consumer health has created a new category of consumer: the anti-salad dressing consumer aka ‘a smart person‘.

Highly intelligent articles such as “Zen and the Art of Making Aioli Sauce” from 2012 have empowered DIY salad dressing makers.

It is EASY to make your own dressing, you will get a HEALTHIER result, and it WILL TASTE BETTER.

This is why Qualifirst, besides selling ingredients that allow you to make the best salad dressings in the world, only sells “all natural, sugar free & hard to make at home” dressings like Vino de Milo and NaGo.

Our customers know that the high-quality ingredients such as our Olive Oils and different wine-based vinegar gives them the tools for a superior tasting dressing, a healthier dressing, a lower cost dressing, and one additional benefit: the pride of DIY.

I recently visited a friend and his whole family loves French Dressing, buying different store brands. There were three different kinds in their fridge, each about half full. I threw them away, recycled the glass, and made a batch of French Dressing from Scratch.

When I served the salad the entire family had that ‘hit-me-with-a-stick-this-is-the-best’ look on their faces (I see that a lot) and declared it was the best French Dressing they had ever tasted. Today they make their own and tweaked the recipe to their taste (they put more tomato paste and upped the garlic a lot, the fiends)

Salad Dressing Tips of the Day:

It took me 15 minutes to make a little more than a liter, and the cost was $10.43 for the 3.5 cups of French Dressing or $12.60 per liter. A liter of a popular store-bought french dressing works out to $8 per liter but the first ingredient is water (!) and usually there is High Fructose Corn Syrup (HFCS) somewhere in there.

More on this … HFCS

It is quite common in store-bought dressings and that alone is enough to avoid them. In a recent July 2014 article in Natural News they detail that 30 percent of all foods containing HFCS are basically contaminated with Mercury, which is a toxic metal. In fact, go through every food you own: if there is HFCS, throw it out and do not buy it again.

At Qualifirst no product containing HFCS is allowed … period.

There will be other DIY articles on Salad Dressings in the future from me but this blog should make you determined to invest $4 per liter towards your health in salad dressings and DIY. If you own a store and want to give your customers a real bottled salad dressing, feel free to use or adapt this recipe. Last note, make sure that you sterilize your jars in boiling water.

“To make a good salad is to be a brilliant diplomatist … the problem is entirely the same in both cases.