The Romance of the Coconut as an ingredient 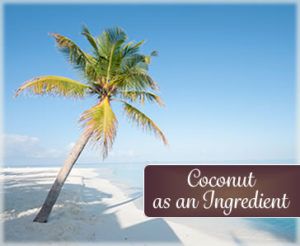 There is no clearer vision of the tropics than that cluster of coconut trees, sand under a hot sun, with a transparent sea lapping the beach. At the base of some of these trees are the fruit ... coconuts ... the subject of this Blog article.

Actually I am going to talk about Coconut Oil but first things first, let’s take a look at the whole coconut, which is ‘technically’ not a nut but a ‘drupe’. Common usage being what it is, most people know it as a nut, or “coconut“. I include links to the differences for the keeners.

The coconut is an amazing food ingredient. Here is the coolest description I have ever heard about the coconut:

The coconut (the fruit of the palm cocos nucifera) is the Swiss Army knife of the plant kingdom; in one neat package it provides s high-calorie food, potable water, fiber that can be spun into rope, and a hard shell that can be turned into charcoal.

It has been a base-of-life food for well over a thousand years, with the earliest records showing up in clay tablets.

The hard shells have provided bowls and implements for people since time immemorial and even today, simple bowls made from half a coconut is a sure sell to tourists visiting the tropics. (I have a few and they are fundamentally useful around the house)

The flesh inside the coconut yields Copra, that white, tasty part of the coconut prized around the world.

INTERESTING FACT: copra is 70% oil and man has been extracting oil from the copra of coconuts since at least 100 AD. The process was recorded on a Tamil manuscript dating from that time!

Copra is extracted from the coconut on site, either by smoke drying, sun drying, or kiln-drying, and sometimes a combination of these three drying techniques.

Once the oil is taken out, you are left with the fibrous copra meal aka coconut cake, which has too much fiber for human consumption on a regular basis but perfect for livestock.The dry meal of copra cake is about 25% protein and the high-fiber content is just made for ruminant animals such as cows.

So how do they get the oil out of the Copra?

Traditionally the copra is grated and then boiled. (image courtesy of easyoilpress) 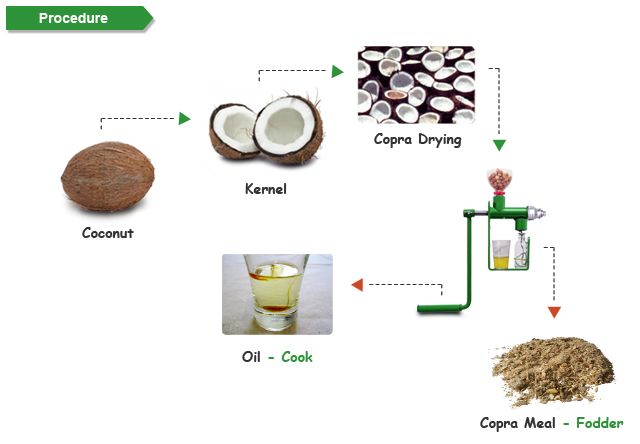 The oil you get from this simple process is raw but the way the Copra is dried locally on plantations is far from sanitary, so the oil is generally refined. This coconut oil is called “RBD Coconut Oil” where RBD means “Refined (using Sodium Hydroxide to remove free fatty acids), Bleached (this means passed through clays to remove impurities, not liquid bleach the chemical), and Deodorized (Steam). This is known as the “Dry Process” and the resulting Coconut Oil is yellow.

There is a better way to get Coconut Oil out of the Copra: the “Wet Process“. The raw coconut meat is crushed to make an oily mass. This mass is an emulsion of oil, water, and protein which then has to be worked to extract the Coconut Oil. Clearly the screw press to get the Raw Coconut oil out is going to be purer than using a solvent such as Hexane. Granted you get 10% more Coconut Oil using Hexane but who wants Hexane (even a microscopic amount) in their oil? (No one). Modern technology and centrifuges made the process better. Centrifuges work, so kudos to science, winning again.

Using the “Wet Process” and mechanical extraction methods you can produce “Virgin Coconut Oil” or VCO. Unlike RDB Coconut Oil, VCO is transparent like water.

The Asian and Pacific Coconut Community (APCC), which represents 90%+ of coconuts sold in the world, have defined VCO as “Obtained from fresh, mature coconut kernels through means which do not lead to alteration of the Oil.” It should be noted that VCO is water-clear containing natural Vitamin E. Coconut Oil is about 2.5% of the world’s total vegetable oil production. 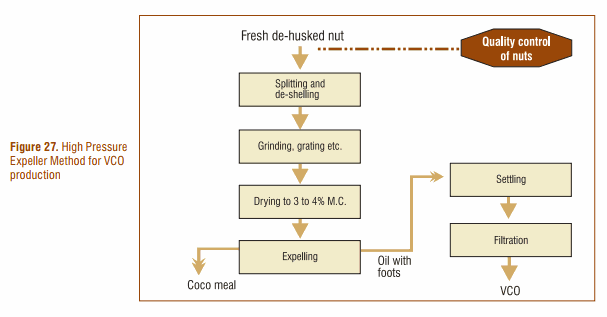 For keeners here is the FAO 80 page manual on virgin coconut oil production which I found fascinating to read. The FAO is the Food and Agriculture Organization of the United Nations.

Lets move on to the actual Coconut Oil … What is it?

The reason coconut oil was demonized in the 1950’s was part political and part bad science.

The medical community declared war on saturated fats like coconut oil thinking it was bad for heart health (it isn’t) and the seed oil lobby (big business back then) in the U.S. wanted to replace coconut oil with their “made in North America” seed oils. The pressure was huge and coconut oil (also palm oil) was generally phased out. These are the reasons coconut oil was erroneously considered a “bad” oil in post WW II North America. Science has caught up with this mistake as the medical community now understands the relationship between fats and human health much, much better.

In India coconut oil has been a recognized part of good health for over a thousand years and an integral ingredient in Ayurveda, the Hindu traditional medicine that has stood the test of time.

In the 1950’s when North America demonized coconut oil the move was greeted with general outrage. Why? Well, from the Indian perspective, 1,000+ years of medical practice using coconut oil in a positive-for-health manner could hardly be overturned by a decade of U.S. experience.

We now know that it was intensive lobbying that moved industrial food production towards hydrogenated oils (trans fats) made by U.S. business interests for profit. Today the trend is to ban transfats to combat heart disease.

SO, what is so special about Coconut Oil?

Lauric Acid is about half of Coconut Oil and the most abundant naturally occurring source of Lauric Acid on Earth.

Once consumed, our body changes Lauric Acid to Monolaurin, a monoglyceride that actually demonstrates anti-viral, anti-bacterial, & anti-fungal properties, in fact stopping them cold (by disrupting their lipid membranes but TMI …). Sounds like a magic bullet.

Hmmm, where else do we find monolaurin? Mother’s Milk … which protects babies as their immune system boots up.

This fact has led to a tsunami of health claims associated with Coconut Oil.

To be fair a lot of them are true, though some sound … well … insane.

One thing that is true is the fact that Lauric Acid and monolaurin is at the center of a lot of research right now, for everything from HIV to athlete’s foot. It is interesting to note that the amount of lauric acid consumed in North America has been going down since the 1950’s, which automatically means that you have less monolaurin in your system.

Your buddy that “loves” coconut may indirectly be getting healthier than you “accidentally” in the same way that people in Britain in the 1850’s avoided Goitre “accidentally” by eating seafood and getting enough Iodine for good health. Goitre is a thyroid gland problem linked to a deficiency in Iodine and – incidentally – the reason modern regular table salts from mines are iodized.

Back to Coconut Oil … so how much do you need? According to various sources Coconut Oil is the best source of Lauric Acid, with about 7 grams per tablespoon. The health benefit to skin and hair is so well-documented that adding some coconut oil to your diet is a no-brainer. Even a tablespoon of grated coconut gives 2 grams. There is no RDA (Recommended Daily Allowance) for Lauric acid but experts seem to settle on three tablespoons a day.

Even without becoming OCD about the exact dosage, it is pretty clear there is a health benefit associated with Coconut Oil for humans.

Now for the crazy claims: enzymes. I could not believe it when I started reading all the craziness about how virgin coconut oil has “more enzymes”. Remember that Coconut Oil is a fat. What happens when you mix any fat with enzymes? It gets rancid … quickly.

Coconut Oil is incredibly stable, hence the desirability of using it in food to extend shelf life of a product.

Some Practical Uses of Coconut Oil:

There is no shortage of long articles on the web detailing the benefits of Coconut Oil, including this one with 101 uses for Coconut Oil but some of them are a little “out there“.

Here is my list of the top 10 that are … ahem … a little more practical.

So do the stories about the miraculous properties of Coconut Oil ever stop? Not really. It is a very stable oil, so people use it to try and solve problems. When those solutions work, word spreads like wildfire. Take point number seven above, that mixing coconut oil with apple cider vinegar is a successful treatment for lice. I was skeptical but once you dig deep, you start hitting scientific studies. This one from 2010 uses Coconut Oil and Anise to eliminate lice population in hair.

Let’s look at the claim that Coconut Oil can remineralize teeth. Putting aside the fanciful stories of coconut-eating Islanders with perfect teeth, I started looking into this but quickly got bogged down in hundreds of documents, studies, opinions, and people who swear coconut oil works. Most importantly, a solid scientific consensus exists stating clearly that diet is fundamental to good oral health, including remineralizing teeth.

The bottom line: Coconut Oil has a positive impact on dental health as part of a dietary improvement.

So what about Coconut Oil lowering Cholesterol naturally?

Well, this is one of the oldest health claims for Coconut Oil (among 50 others) and basically has been proven accurate. A LOT of scientific work has been done on this going back to 1957. Without turning this Blog post into a 500-page book, the cholesterol-lowing reputation of Coconut Oil seems to come from the fact it stimulates your thyroid, which converts excess cholesterol into the useful building blocks used by the body to repair itself.

Weight loss? Farmers tried feeding cheap coconut oil to farm animals in the 1940’s but discovered that their animals became lean and hungry, with lots of energy. Thin animals were not the desired outcome for livestock, so eventually they switched to soy and corn. The result was fat and lazy cattle.

This would be a fun story except for the fact that the western diet is having much the same effect on people. So does Coconut Oil reverse the trend? Looks like it does and a small, regular dose of raw, virgin coconut oil makes the body more efficient and tends to optimize weight. The science looks sound.

What puzzled me is why a product with such obvious health benefits would be basically marginalized in today’s society? It turns out that the industrial grain oil lobby that drummed coconut oil out of the “approved diet” is hard at work trying to make sure it does not return.

As evidence mounts in favour of this amazing food ingredient, expect it to get more popular.

More importantly, as common sense replaces the lemming-like rush towards profits at the expense of good health, coconut oil will shine.