How to make sure your customers tweet your dishes

In today's multimedia world, the key to making your recipes and dishes flow into the internet as well as your customer's stomachs is to realize the importance of presentation.

For decades professional kitchens have photographed their dishes to make sure that what comes out of the kitchen is EXACTLY what the Chef wants, crafts, and decides. Consistency is an important part of the equation and that is why each dish is photographed.

This highly organized part of kitchen production is little known to the public and the reason dishes out of a good kitchen look so great … they are designed to be great. 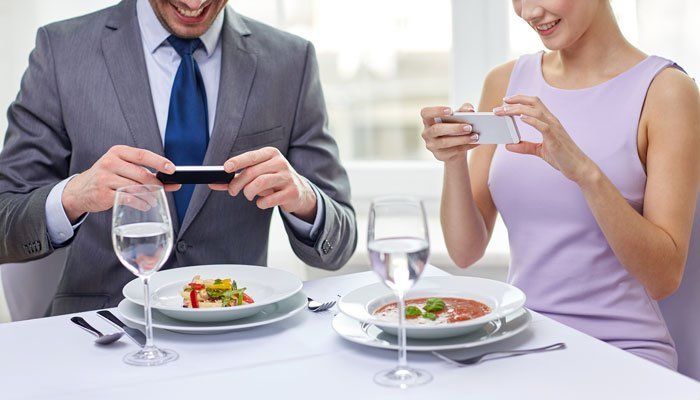 So the first step is everything has to not only be delicious & healthy … but beautiful. ‘Pride in craft’ with respect to the finished product released from a kitchen helps immeasurably to making sure your food gets tweeted.

An obvious second step to also make sure your restaurant has free and open internet.

I still shocks me to step into a high end establishment only to learn that there is either no internet or that the restaurant thinks the customer should do handsprings and yoga contortions, create passwords, register, or any step really to be able to get on social media to say the restaurant is awesome. Free internet is – today – a requirement to make sure customers can communicate.

Customers photographing their food. Wow … this is recent and to be encouraged. Old school Chefs and food service professionals just do not get it. People photograph their restaurant meals because it is better looking than normal and they want to remember it. It is such a pervasive part of the dining experience that you have to allow it.

In fact, you should encourage it.

Modern menus remind customers to review on Yelp, Facebook, and Twitter. Word of mouth has always been important to a restaurant’s success or failure. Today this means you want people to Tweet your dishes simply because they talk less and Tweet more.

On your menu, add appropriate hashtags and certainly the Twitter name for the restaurant because people really want to see this.

Additionally there is the fact that a customer that has a great meal will – on average – tel a dozen friends or so about the restaurant and the dish. With Twitter that number soars to over 50 and with a picture, even if someone forgets, they can search their past Tweets.

Customers tweeting your dishes every day is better than a print ad!

I make a point of going to some of the best restaurants in the world as part of my travels. Sometimes, I was shocked to be told they do not allow photographs. So I am thinking, “Are the dishes served on top secret documents?”. I did push back and challenge the rule. “Policy of the house” was the reply. My reply was: “The check please”. Saner heads prevailed every time and they allowed me to photograph.

I respect that some Chefs want to keep their creative results somewhat under wraps but the reality is in today’s world, there is less ‘word of mouth’ and more ‘words of Tweet’ and as we all know, a picture is worth a thousand words, a good deal when Twitter limits us to 140 characters.

One super-innovative & cutting-edge idea (which has probably already been done) is to advertise on certain days “Tweet us and the coffee is on the house” giving their Twitter address.

Now for a practical demonstration. Today I was invited by my real estate bankers (Qualifirst is building a new warehouse in Western Canada) for lunch at a local, modern restaurant. I am a guest. After a small salad I order the Mushroom Risotto, which requires skill to prepare. I receive my Risotto and it is amazing in the two dimensions that count for me (in order): taste and presentation.

It gets tweeted. I also made a point of telling the server that the risotto was outstanding.

Everyone that sees this now has an instant reference, which they can look up later, “for that restaurant that Yves had an amazing Risotto at”.

Probably the best way to consider Tweets of dishes from a restaurant is free advertising, though I prefer to consider a Tweeted dish as a direct compliment to the Kitchen Team.

Tweets from customers is only a part of a restaurant’s Twitter strategy. Increasingly the front of the house in a restaurant (Managers) manage the flow and response to Tweets. During the busy lunch or dinner periods no one expects a reply to a Tweet from a restaurant but it is a good policy to reply to any @ mention.

The more followers a restaurant gets on Twitter, the deeper the reach of that restaurant in the dining community. It is sun-rising-in-the-east obvious that a restaurant with 10,000 Twitter followers is going places, but for practical reasons a good goal is to get as many followers as you have restaurant seats … then go for double that. This will allow the restaurant to start actually Tweeting out news selectively.

The modern world is fast-paced like a busy kitchen. The Town Crier hired in the 18th century to get the news out worked … hundreds of years ago. Today Twitter is the electronic word of mouth of the modern world and a real tool to the successful growth of any restaurant business.