As an American humorist once put so well: Nine out of ten people love Chocolate ... and that tenth person ... is lying.

The North American love affair with Chocolate is being put to the test as demand for chocolate is outstripping supply, which means that the price of decadence-in-a-bar is about to go up.

Cacao is a fundamental world commodity so this price increase applies across the board, affecting the cheap, grainy pseudo-chocolates & also the top of the line melt-in-your-mouth chocolates.

The better and purer the chocolate, the more the price jump will be felt.

Serious chocolate makers do not add fillers and miscellaneous additives, sticking to the basics of great Chocolate: Cacao, Cacao Butter, sugar, and some vanilla. 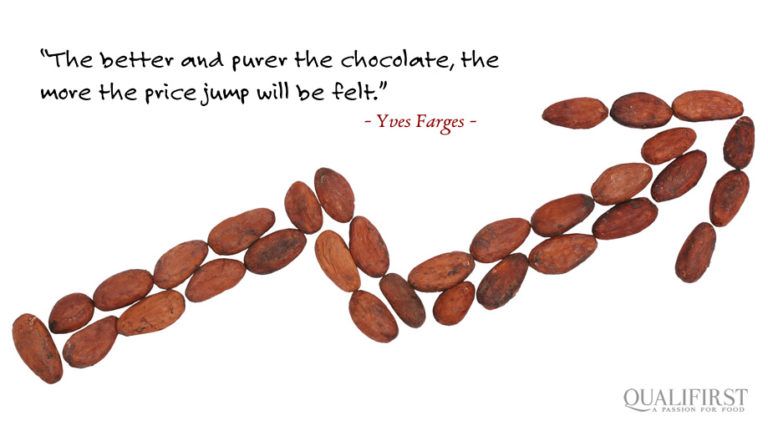 If chocolate pricing goes up, so does Cocoa Butter.

There is some confusion about what “Cocoa Butter” actually is so here is the simple answer.

When Chocolate is made, the fermented and dried ‘feves’ from the cacao pod are processed to get two things: the shell and the cacao ‘nibs’. When I say “processed” it means that the ‘feve’ is roasted, then crushed and shelled.

So what is the real difference between “Cocoa Butter” and “Cacao Butter”?

No, it is not the same or some weird spelling mistake.

Cocoa Butter is removed from the Cacao mass using either heat, pressure, or chemicals (alkali salts) and is generally speaking lower in the active Flavenols that you find a LOT of in the Cacao once the butter is removed.

Cacao Butter is removed from the Cacao mass using gravity or lower temperature methods (Broma Process described later …) so it is higher in those healthy Flavenols the press is going gaga over.

They are both basically the same thing but the way you get them makes Cacao Butter the better of the two.

This blog post is about that wonderful component: Cocoa Butter! This separation of Cocoa Butter from the chocolate mass can be done two ways: by “Dutching” and the “Broma Method”.

The Dutching Process is the chemical route, developed (no surprise here …) by a Dutch chocolate pioneer Coenraad Johannes van Houten in the early 1800’s where alkali salts are added to the chocolate mass.

The Broma Process was discovered in the Domingo Ghirardelli factory in California in 1865, where it was discovered that if you hung a bag of the Cacao mass in a warm room, the Cacao Butter dripped off. In fact more Cacao Butter is removed using the Broma method that using brute force of hydraulic presses. The added plus is no chemicals 🙂 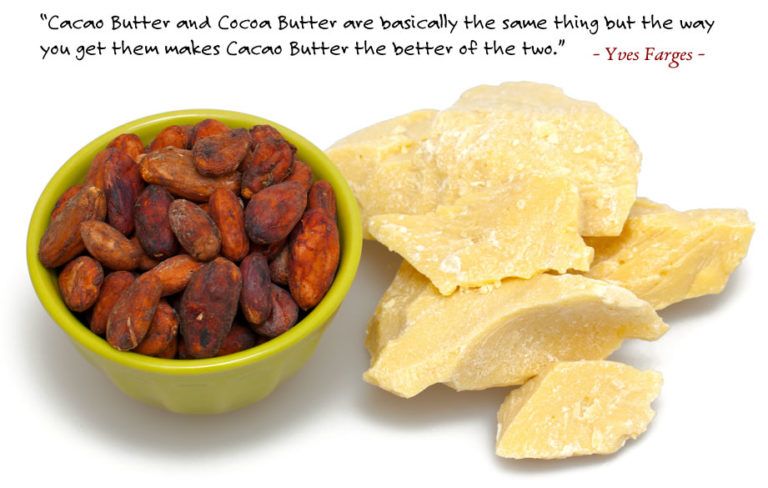 So what is Cocoa Butter & how is it good for you?

We can start with the fact it used to be called “theobroma oil“. It is pale milky white, has an aroma of cacao, no surprise there.

Used by the cosmetic industry, the main job for Cocoa Butter is to make high quality chocolate when recombined with pure cacao and sugar.

Cocoa Butter is almost caffeine-free and only has trace amounts of theobromine, the bitter alkaloid that gives dark chocolate that prized bitter taste profile.

Complex but incredibly stable, Cocoa Butter is valued as a non-toxic solid at room temperature. Perfect for medicine and the cosmetic industry. The number of skin creams and cosmetics with Cocoa Butter is too numerous to list.

It resists oxidation which is the reason that chocolate has a long shelf life, avoiding becoming rancid.

It is when Cocoa Butter is re-combined optimally with Cacao solids to make chocolate that a star is born.

The industrial side of chocolate making is oriented towards profit … and by this I mean profit at the expense of quality and really at the expense of the consumer. Cheaper candy bars are a lot of sugar and cheap fillers instead of Cocoa Butter. The main filler is the well-known and currently-under-a-cloud Soy Lecithin, that ubiquitous emulsifier extensively used in processed foods.

Personally, I have avoided anything with Soy Lecithin for decades.

I regularly urge friends and audiences to simplify their lives + probably lengthen their lives by avoiding weird chemical fillers like Soy Lecithin. The main (if not only …) purpose of Soy Lecithin is to maximize industrial profits.

There is recent research (2013) indicating that Lecithin is converted by gut bacteria into chemicals which over time could contribute to atherosclerosis and heart attacks (see the Wiki link above for Soy Lecithin).

Sounds like a good reason to eat pure chocolate made with Cocoa Butter or healthier still Cacao Butter.

So the bottom line is yes, the price of (real) chocolate is going up.

Serious companies that use a lot of Cocoa Butter as well as Cacao to make world-class chocolate are going to get hit twice with serious price increases. Look for it.

The chocolate Qualifirst sells is Michel Cluizel and free of Soy Lecithin I am proud to say.

The estate plantation chocolates from Michel Cluizel have only four ingredients: Cacao from the plantation, Cocoa Butter from the same plantation, Cane sugar, and bean Vanilla … that’s it.

Off to Baja tomorrow so my next Blog post will be oriented towards Mexico.